The new 2012 DYNASTY League Baseball Official Rulebook has been updated to include previously released new rules that were not included in the last edition from 2004.    Most notable is the new 60 AB universal pitcher situation JAM rating used in all situations  for all pitchers facing pitchers batting with less than 60 AB.  You will also find the new 0-4 IP 2 day rest requirement in the Pitcher Rest Rules on page 9. 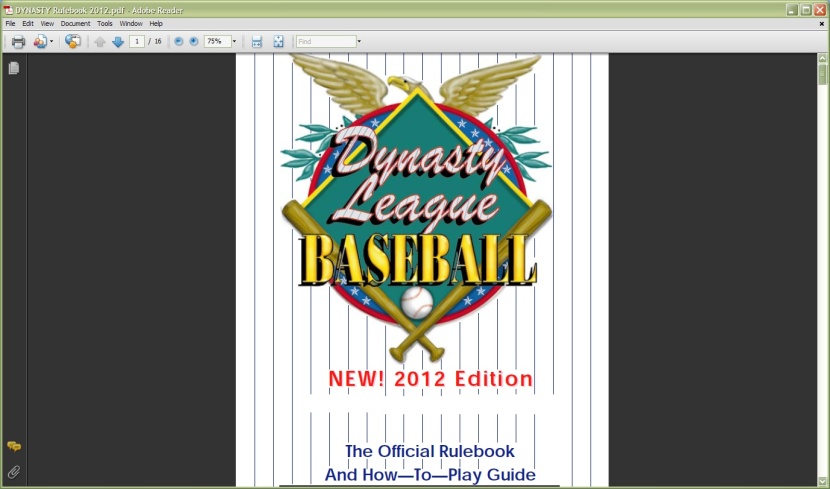 DYNASTY League Baseball Online is the First and Only Real Time Baseball Simulation for Draft Leagues
If you have players in many different locations, the beauty of DYNASTY League Baseball Online is that it can easily manage your league and update stats, standings and leaders in real time. This is a first for Baseball simulations.  Never before have real time draft leagues been available for Baseball simulation games.  Previously each league member would have to export his league file and send it to a central commissioner who would then have to import each league file and then export and send the files back to each league member so that league members could import the updated file again.   Of course that is far from real time and  in today’s connected world it is downright prehistoric to have to go through all that drudgery to update your stats, standings and leaders.

You join a league and then choose a franchise that includes the matching ball park and then draft your team with a fictional $300 budget from the most recent season of DYNASTY League Baseball player cards that continues each future season when the new season player cards are released  in a Dynasty play format.  Draft day consists of a Major League draft in which you draft your 25 man roster and then a Minor league draft of 8 additional players that you can call up and send down during the season for a total of 33 players under your control.

After the draft, you are then able to start your season immediately because all of the team rosters have already been saved and integrated by the new live draft room and the scheduling is all done for you.  You are then able to easily play live games for your series just by clicking on the join game button or if you can’t make a series have the new computer manager profile play for you. 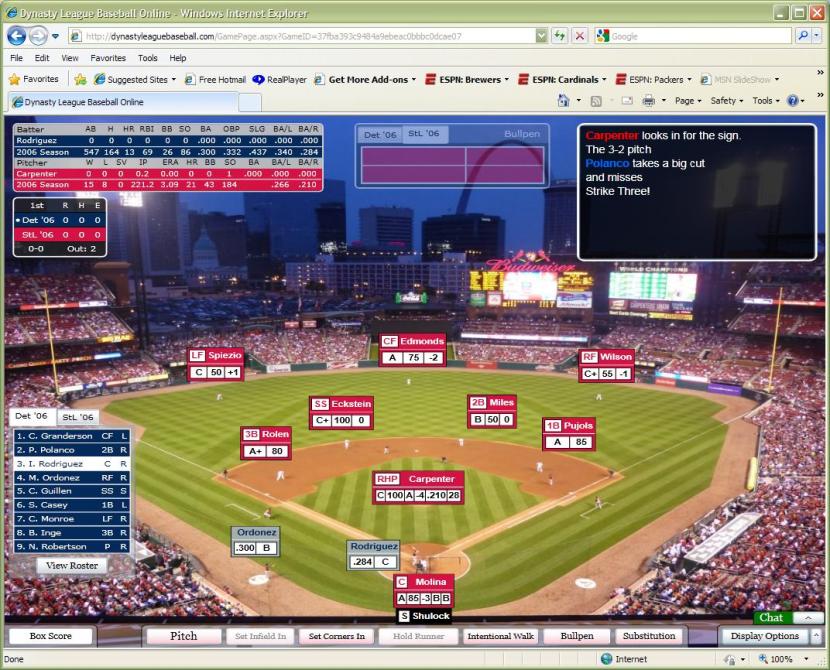 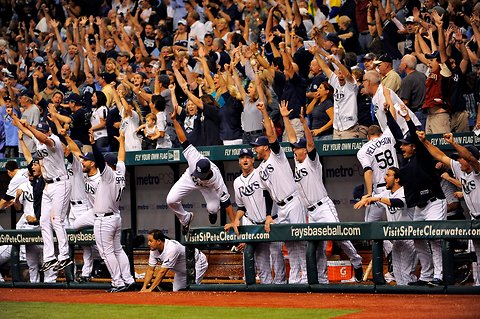 September 28, 2011 arguably goes down in MLB history as the Greatest single day in regular season history with a finish so unlikely and so dramatic it seemed it was scripted from the writers of “24”.

Dan Johnson’s 2-out, 2-strike Home Run in the bottom of the 9th that capped off a seven run comeback vs. the Yankees and saved the season for the Rays.  For Johnson’s heroics he earned a Clutch hitting situation rating on his new 2011 season DYNASTY League Baseball player card.  It is very unusual for a non-RBI leader to earn a Clutch hitting rating, but it has happened before with Al Weis 1969 Mets, Tom Lawless 1987 Cardinals and Manny Mota’s 1977 Dodgers player cards.

The AL East perennial powers Boston and New York both failed to earn a JAM situation rating for their relief aces Jonathan Papelbon and Mariano Rivera.  Papelbon lost his chance for a JAM with an unimpressive .273 BA with RSP/2 out.  Rivera was not only mediocre with a .261 BA/.435 SLG with RSP/2 out, but got rocked with RSP at a .326 BA/.488 SLG clip.

DYNASTY League Baseball fans Dave Kerpen and Andrew Kaufmann debated the merits of the Mets R.A. Dickey chance for a JAM rating in the 2011 season player card set.  What it came down to is that even though Dickey won only 8 games he was a candidate for a JAM rating because he was amongst the Official ERA leaders with his 3.28 ERA.  Dickey earned his JAM rating on the basis of a .184 BA/.241 SLG with RSP/2 out.

The poster boy for a JAM rating is Tim Lincecum who dialed it up with RSP/2 out allowing a .115 BA/.177 SLG.  Now THAT is a pitcher who can get out of a jam! 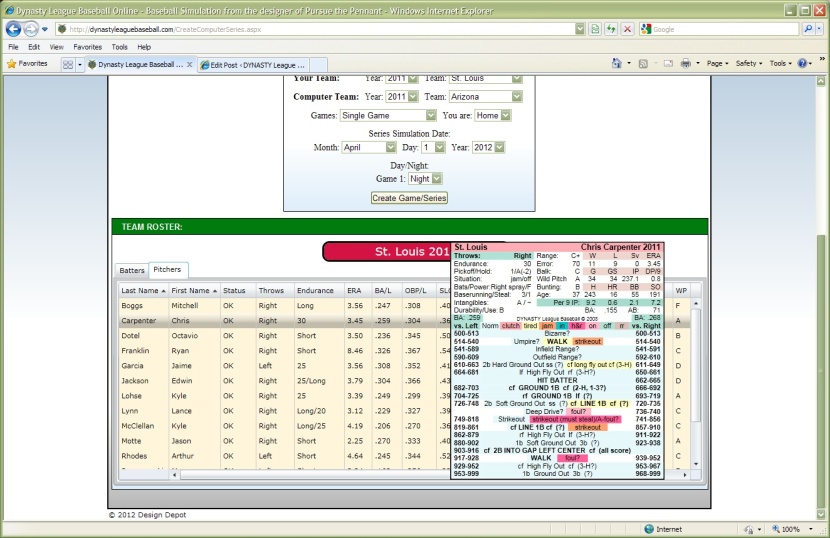 How could he not after besting Phillie Ace Roy Halladay in a Game 5 NLDS 1-0 duel of aces to end all pitching duels?  A .236 BA with RSP/2 outs during the regular season helps too. 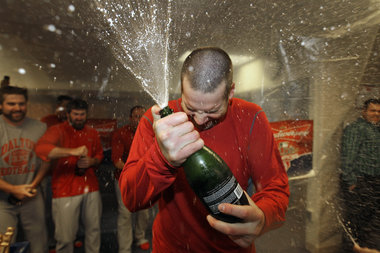 Beer in the bullpen?  The Red Sox cleaned house after the season becaue the clubhouse chemistry had gone awry.  The starting rotation of Beckett, Bucholz, Lackey and Lester all got slapped with a D intangible rating for their Boston beer party.

Mark Buehrle staked his claim on this generation’s version of Jim Kaat with an A+ Range rating and 90 Error rating.  Buehrle ranked #1 in the Fielding Bible Plus/Minus leaderboard for pitchers with a +4 score to his right, +2 in the middle and 9 runs saved.

Troy Tulowitzki (A/100/-5) earned an A Range rating  on the basis of his excellent  5.05 Range Factor (1st) and his solid Fielding Bible +10 score.  Error 100 ratings are historically rare and Tulowitzki’s .991 Fielding pct. got him the top historical rating on the scale.  Tulo’s player card is a true gem topped off by his -5 Double Play pivot rating which was earned on the basis of his #1 ranked DP pct. of .681.

In the AL, Brendan Ryan (A/70/-5) ranked 1st in the shortstop Fielding Bible rankings for the second year in a row with a +22 Plus/Minus.

It’s rare that a rookie would debut with an A range rating, but that is exactly what the Angel’s Mark Trumbo (A/70)  did ranking 1st in Fielding Bible Plus/Minus (+11).

Washington’s Rick Ankiel continues to not just impress, but to put himself in the pantheon next to Clemente in terms of throwing arms.  Ankiel’s 7 “kills” and 9 runs saved ranked him 1st among all CF.  MLB scouts also graded Ankiel’s arm an 8 on their 2-8 scale.   Ankiel (B+/90/-4) earned a very rare -4 throwing arm rating in 2011 in both CF and RF.

Atlanta’s Michael Bourn continues to be as menacing as Jason Bourne – only Michael does his killing on the basepaths.  Bourn scores a 10 Baserunning rating and top tier lead (7/6/2) and steal (8/7/1) ratings at 2nd/3rd/Home. 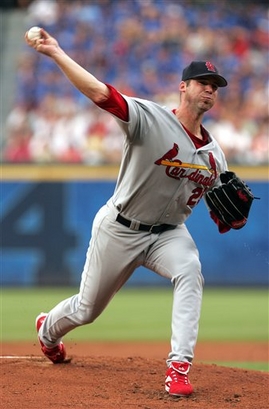 Without further adieu, lets get on with some nuggets from the 2009 season player ratings.

You see it here.  No JAM rating for Chris Carpenter.  I tried every way I could to give Carp a JAM rating, but his .264/.375 BA/SLG with RSP/2 outs sank his ship like the great Bismarck German battleship going down to torpedo planes.  Here we have what may be the NL Cy Young winner and he was just mediocre in JAM situations.

Chris Carpenter did earn situation ratings for both OFF (very few walks to lead off batters) and ON (very few HR with runners on base).

Wandy Rodriguez who had an excellent season also ended up NOT getting a JAM rating (.260/.403).

Seems like an annual rite of passage that Derek Jeter’s range is discussed.  This year Jeter
worked out extensively in the off season to improve his range and reports were that his range had improved.  Despite an undewhelming Range rating of 3.90, Jeter did go from a John Dewan Fielding Bible plus/minus rating of -11 to +5.  Jeter C+ Range rating.

Jeter’s teammate Mark Teixeira slipped a bit, but still scored excellent range (B+).  Teixeira didn’t slip hitting in the clutch (.355 BA/.597 SLG) and will be a terror in the clutch on his 2009 player card.

Johnny Damon’s throwing arm is at +1 and hanging off the cliff looking at +2 below.  Damon ranked 11th in runner advancement among LF (.321).  Maybe not the +4 arm that Joe Girardi imagined in Game 3 of the ALCS when he pulled him in favor of Jerry Hairston and in the process giving up the Yankees DH and Mariano Rivera in one swoop.

Prince Fielder had what Brewer owner Mark Attanasio called the best season by a hitter in Brewers history. That would have to be an outstanding performance given some of the great seasons put up by Fielder himself, Ryan Braun and of course Cecil Cooper, Paul Molitor and Robin Yount.  Hammering away with a .343 BA and .600 SLG with RSP/2, Fielder was certainly a very large terrorizing hitter in clutch situations to any pitcher in 2009.

A hitter’s performance in the most critical situations. Like obscenity, a “clutch situation” may be best defined as “I know it when I see it.” The determinants here are the things that make you feel it in your gut, including the lateness of the inning, the closeness of the score, the number of outs and men on base, the stage of the season, and the importance of the opponent.

Huston Street was on the cusp, but was way more effective with no one on base than in a JAM.

Young rising Oriole star Adam Jones garners an A Range rating and -2 Throwing arm.  Jones had the highest Range factor among all cf.

Ellis Range took a big hit though down to a C+.

Another sleeper for clutch hitting is Casey McGehee.  A little short on AB with 43, but I don’t see how you can ignore .512/.953.  Forget Chris Coghlan, McGehee should have been NL rookie of the year.

Best AL OF arm?  That would belong to the canon arm of Toronto’s Jose Bautista (B/-3) whose Assists, Kills and Extra Base pct. were all outstanding.

Fernando Rodney ended up being a border line case for receiving a JAM rating because of a RSP/2 SLG of over .500.   He did limit batters to a .205 BA with RSP/2 and lead the AL in save percentage to get him over the top.

Skip Schumaker’s move from the OF to 2b was a success – sort of.  Skip improved as the season went on, but could only finish with C Range because of a poor start (-14 plus/minus). Schumaker surprisingly did garner a -5 Pivot rating on the basis of his leading NL 2b in Pivot %.

The Mets Luis Castillo has gone from being one of the best at turning the DP to one of the worst and got tagged with a +5 Pivot rating at 2b.

Baseball broadcasters in the know were talking about the National’s Nyger Morgan’s range in CF all year long.  Morgan ended up with a teriffic range factor, +/- and UZR to grade out at a rare A+ range rating in CF.  Morgan is a real speed burner with a 10 Baserunning rating and 7 Steal of 2nd rating.

Another emerging player is ss Brendan Ryan, who Cardinals broadcaster Al Hrabosky felt should have won the NL Gold Glove.  Ryan was excellent in every category (A/90/-5) and lead NL ss by a wide margin with a dazzling 5.41 range factor.

The Cubs Milton Bradley?  You know what is coming here… F Intangible rating.

It is a lost art, but Bengie Molina, Ramon Hernandez and Ivan Rodriguez all garnered the “BL” blocking the plate rating.

The 2009 season player card set can be ordered here.